Matteo Berrettini says his valiant effort in losing to Novak Djokovic in four sets in the Wimbledon final on Sunday is “not the end, it is the beginning” and he believes he can one day lift the trophy at the All England Club.

The 25-year-old Italian showed great pluck to come from a break down and win the first set before the Serb gathered himself and won 6-7 (4/7), 6-4, 6-4, 6-3 for a record-equaling 20th Grand Slam and sixth Wimbledon title.

“It is not the end, it is the beginning for me,” said Berrettini, appearing in his first Grand Slam final.

Berrettini said he would draw on Djokovic’s example of how he improved himself as a player and hopefully become Italy’s first Grand Slam male winner since Adriano Panatta at the 1976 French Open.

“In order to win against him (Djokovic), I have to improve more,” said Berrettini.

“Like he said, he was losing against Rafa and Roger, and thanks to them he improved.

Berrettini may have had the majority of the 15,000 capacity Centre Court crowd behind him — some of them dressed in Italy football shirts ahead of Sunday’s Euro 2020 final with England — but he said he would need more than that if he is to beat Djokovic.

“Probably it would mean even more if you’re able to win against Novak in the finals.”

Berrettini may have fallen short this time but he has gained the respect of former champions like Boris Becker.

Indeed he came close to becoming the first player since Becker in 1985 to win the prestigious Queen’s tournament on debut and add the Wimbledon crown a few weeks later.

“The most important thing for me is that right now I’m losing — obviously you can lose to anyone, but I’m losing against the best players in the world,” he said.

“In Paris, I lost against him (Djokovic), and he won the tournament.

“In Queen’s I won, and then I lost against him again here. It means that my level is growing.

“It means my weapons and my tennis in general is growing. That’s the right path.”

Berrettini said he was “pissed” at losing and he had not played up to the standards he had hoped for but he has taken enough out of the fortnight to know one thing.

“So that’s what I’m going to do in the next weeks, in the next months and years: try to lift the trophy.”

Berrettini wore strapping round his left thigh from the outset but said it had nothing to do with his defeat.

“I have a pain in my leg. Luckily it’s nothing dangerous. I didn’t lose for that,” he said.

Berrettini paid tribute to them.

“Without my family, friends and team all this would not have been possible so I just say Grazie Grazie.” 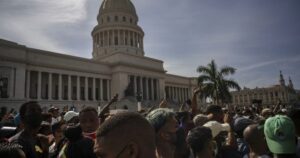 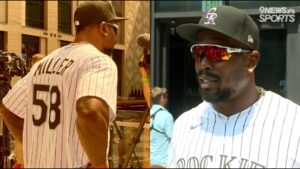